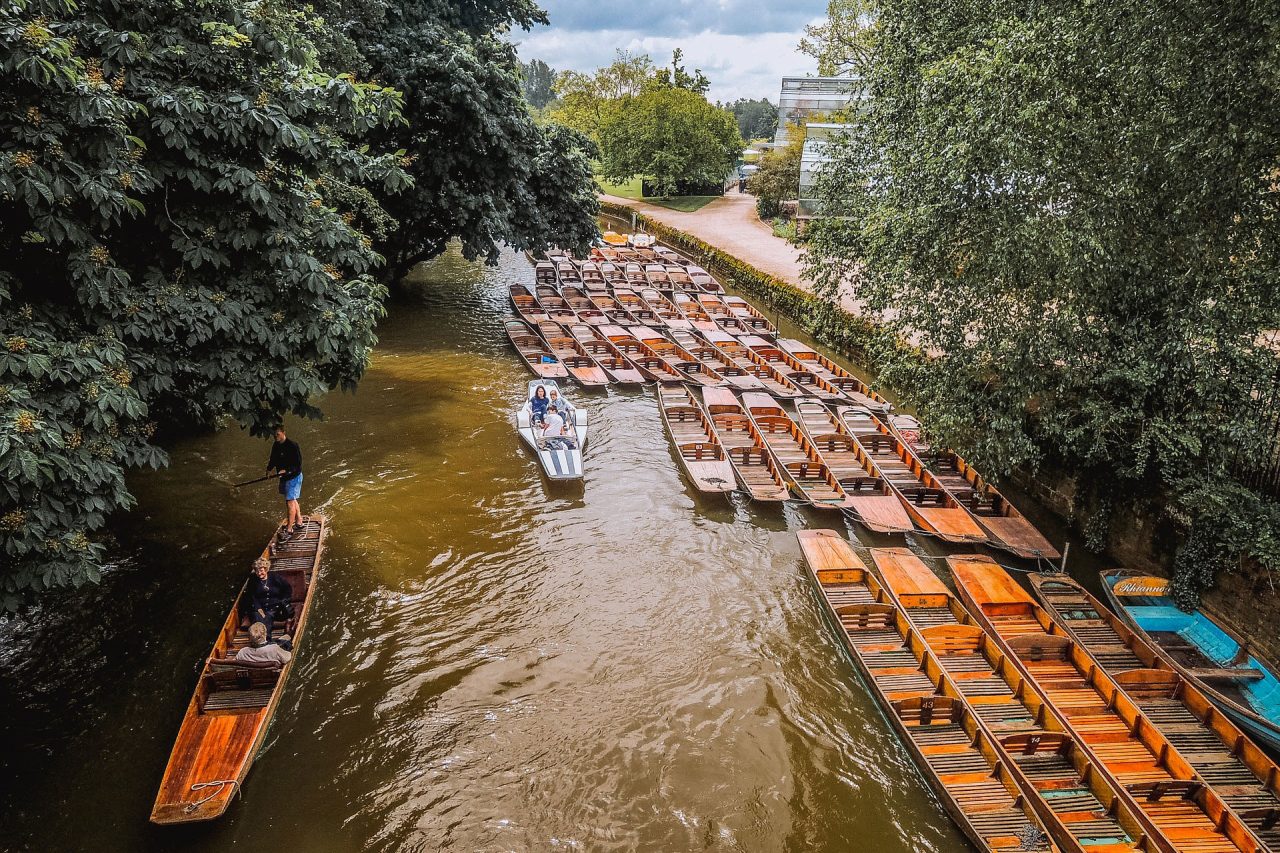 Punting is a popular activity in Oxford but not to the same extent as in Cambridge. The activity differs slightly between the two cities and in both instances, you have the option of either a guided punt or hiring a boat and doing it yourself.

Unlike in Cambridge, where the punter stands on the till (the small raised deck to one end of the punt) and punts with the open end of the boat facing forward; in Oxford, punters stand inside the boat and punt with the till facing forward. Students in Oxford claim that this is the proper way to do it.

Oxford is a considerably quieter spot for punting than Cambridge and it feels like a rather rural experience once you get away from the Magdalen Bridge. This is mainly because the River Cherwell flows through Oxford’s green belt and past parks including Christ Church Meadow and the Oxford Botanical Gardens.

The main drawbacks with punting at Oxford are that the Cherwell is deeper and muddier than the Cam in Cambridge making it a more difficult place if you’re doing it yourself.

In Oxford, you can also punt on the Thames (which is also called the Isis as it flows through the city). The Isis alongside Port Meadow is probably the best spot for punting in Oxford as the river at this point is shallower than the Cherwell with lovely scenery and some nice riverside pubs to go past; however, it is not as good if you go below Folly Bridge as this part of the river is much deeper and shared with both rowing and motor boats.

While both the Cherwell Boathouse and Magdalen Bridge Boathouse rent punts on the River Cherwell, Salter’s Steamers rent punts on the Isis. While the Isis near Port Meadow is the perfect spot for punting, the spot near Folly Bridge where Salter’s Steamers operates from is not quite as good. This part of the river is deeper and it often busy with motor boats and university rowing team practice and is not recommended for the first-time punter.

If it were possible to rent punts further north on the Isis near Port Meadow that would be the best option, but it isn’t so your best option for punting in Oxford is to rent one on the River Cherwell.

Our recommendation is to rent a punt from the Cherwell Boathouse, which is farther from the centre (around a 25-minute walk) compared with the Magdalen Bridge Boathouse but it is a quieter stretch of river for the first-time punter and the Victoria Arms riverside pub is within a relatively short punting distance from here. The Cherwell Boathouse also has a nice restaurant as well as Stu’s Tea Hut serving tea, coffee, beer, Pimm’s, tacos and ice cream. If you were to rent a punt from the more centrally located Magdalen Bridge Boathouse, then your best option is to head north up the Cherwell, which will take you past meadows and the backs of Magdalen College, Merton College and St Catherine’s College which is a lovely part of the river for punting.

Guided punting tours versus renting a punt and doing it yourself

Renting a punt and doing it yourself is also the cheaper option, particularly if there is a group of you as the rental fee covers the boat which can hold up to six people (five sitting plus the punter).

So, if you want to do it yourself, rent your punt from the Cherwell Boathouse but go to the Magdalen Bridge Boathouse (or to Cambridge) if you want someone else to do the work for you.

Punting has been described as being both very easy to master and not as easy as it looks.

It usually best to start off by standing in the boat, which is the Oxford way.

Then drop off the pole into the water from the side of the punt and gently push it as it hits the river bed. Then walk your hands back up the pole and push again.

The idea is to be gentle, as it is supposed to be a relaxing leisure activity and not a race. Push the pole gently and at the end of each stroke, relax and let the pole float back up.

It is usually easier to steer by letting the pole drag behind you and using it as a rudder, but experienced punters will steer as they push the pole rather than use the pole as a rudder.

What to do if your pole gets stuck?

Occasionally your pole may hit mud on the river bed and get stuck. There is a good chance that you will fall in the river if you hold on your pole and try to pull it out, so your best option is to simply let go and then paddle back to retrieve the pole. There should be a paddle in your punt specifically for this purpose.

previous
Getting around Sheffield
next
Visiting the University of Oxford