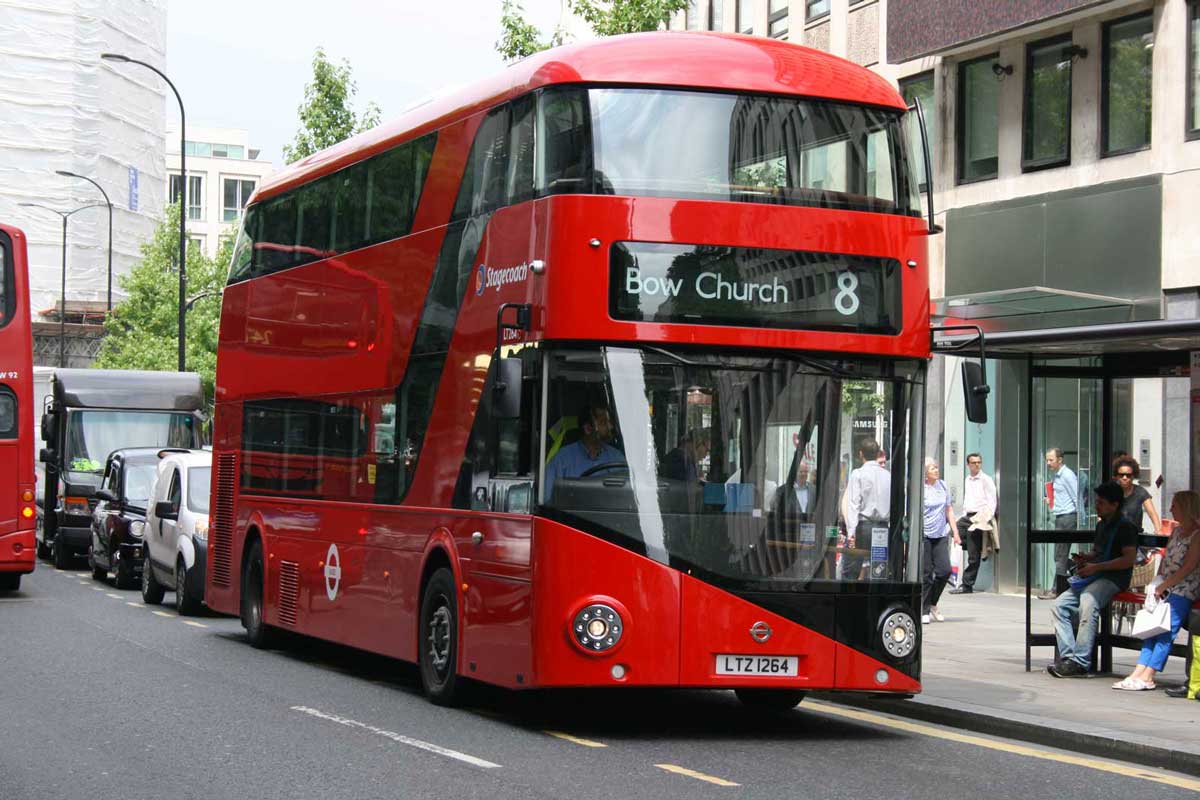 London is a great city that is best seen from the top deck of a red double-decker London bus. You have a choice of one of three companies that run hop-on-hop-off sightseeing tour buses or much cheaper regular London buses.

My recommendation is to ride the proper red London buses but to give you the full picture I will give you a brief overview of the hop-on-hop-off sightseeing tour buses.

There are several tour companies that operate hop-on-hop-off double-decker bus tours around London. Generally, these are overpriced tourist traps that are best avoided.

The Big Bus tour runs a hop-on-hop-off tour with four routes in Central London that take in most sights. A one-day ticket costs £39 (£35.10 if you book online) and lets you hop on and off any of the buses operated by the Big Bus company. Tickets also let you hop on a Thames river cruise between Westminster Pier and the Tower of London and follow along with four different walking tours. Big Buses run approximately every 10–20 minutes.

The Golden Tours hop-on-hop-off bus tour operates on three different routes in central London. A one-day ticket costs £37 and lets you hop on and off the buses operated by Golden Tours. Tickets also include a River Thames cruise and let you tag along with a walking tour. Golden Tours buses run approximately every 5–20 minutes.

If you decide to take one of these bus tours, our recommendation is to only buy a one-day pass, go on a sunny day and start early so you can take full advantage of any included extras (like river cruises and walking tours). Once you get the tour bus out of your system, ride the local buses for the rest of your time in London. Regular local buses are much cheaper, they give you a more authentic London experience and if you choose the right routes they give you a ride just as scenic as the expensive tour buses.

Sightseeing tours where you can’t hop on or off

The Megasightseeing bus is a cheaper alternative to the hop-on-hop-off sightseeing buses mentioned above. Like these buses, it is an open-top double-decker bus with a commentary telling you about places you pass en route,  the two main differences being that this bus is much cheaper than the hop-on-hop-off buses but you can’t hop on or off en route.

Megasightseeing is run by Megabus, which operates cheap coach services throughout the United Kingdom and, like their coaches, tickets are priced according to a yield-management model where prices are cheaper when you book in advance and more expensive when left to the last minute. If you book in advance you can get a seat on the Megasightseeing bus for as little as £5 (plus a booking fee) and you usually don’t have to book too far in advance to score the cheapest tickets.

It is important to know that this is a non-stop tour. You can’t hop-on or off like the more expensive sightseeing tours mentioned earlier. Since you’re on board the bus for two hours, make sure that you go to the toilet before hopping on and definitely avoid taking this tour after a long session at the pub (after five pints, you’re not going to hold on for two hours).

You have a choice of starting and finishing your tour at three bus stops:

The Megasightsing tour has a lot going for it including:

Disadvantages of the Megasightseeing tour are:

While we generally favour independent travel over a tour, we highly recommend taking this bus on your first day in London to give you a good quick introduction to the city, along with a nice vantage point for some photos from the open top deck of the bus.

Follow this up with a visit to the Museum of London on your first day for the perfect introduction to the city. Getting a good introduction to London when you first arrive means that you will get more out of your visit as you may see sights you want to come back to visit in more detail when you’re on the tour and what you learn at the Museum of London will give you a greater understanding of other sights you see in the city.

Once you get the sightseeing tour out of your system, we recommend using regular London buses for the remainder of your stay in London.

In our opinion, it is totally unreasonable to pay over £30 for one day on a bus when £1.55 will let you ride on a regular red double-decker London bus.

There are several other advantages to riding regular London buses:

Regular buses start earlier and finish later than tourist buses. If you’re eager you can hop on a bus around 5am and keep riding till after midnight. If you’re really keen you can even ride one of the all-night bus routes.

We have combed through more than 500 local bus routes to pick London’s top six scenic bus routes. These are the most scenic routes that give the tour buses a run for their money (for a lot less money) while also connecting London’s top tourist attractions.

Starting at Bethnal Green tube station (on the Central line, which is in a different location to the Bethnal Green Overground train station) get bus route 8 in the direction of Tottenham Court Road. This will take you through the more interesting parts of the East End, including Brick Lane (noted for its curry restaurants) and Shoreditch High Street (the epicentre of London’s hipster culture) and then through The City stopping at Liverpool Street Station, Bank Station, St Paul’s Cathedral, City Thameslink Station and then via Holborn Circus and Chancery Lane to Tottenham Court Road Station on Oxford Street.

Route 9 runs from Aldwych to Hammersmith in west London, although you may want to take this bus between High Street Kensington and Aldwych to ride the more interesting portion of the route.

Starting outside Somerset House on Aldwych, bus route 9 will take you past Charing Cross Station and Trafalgar Square, down Pall Mall (in London’s Clubland) to St James Palace, past Green Park station and Hyde Park Corner, down Knightsbridge (for Harrods), past Royal Albert Hall and Kensington Palace to Kensington High Street. 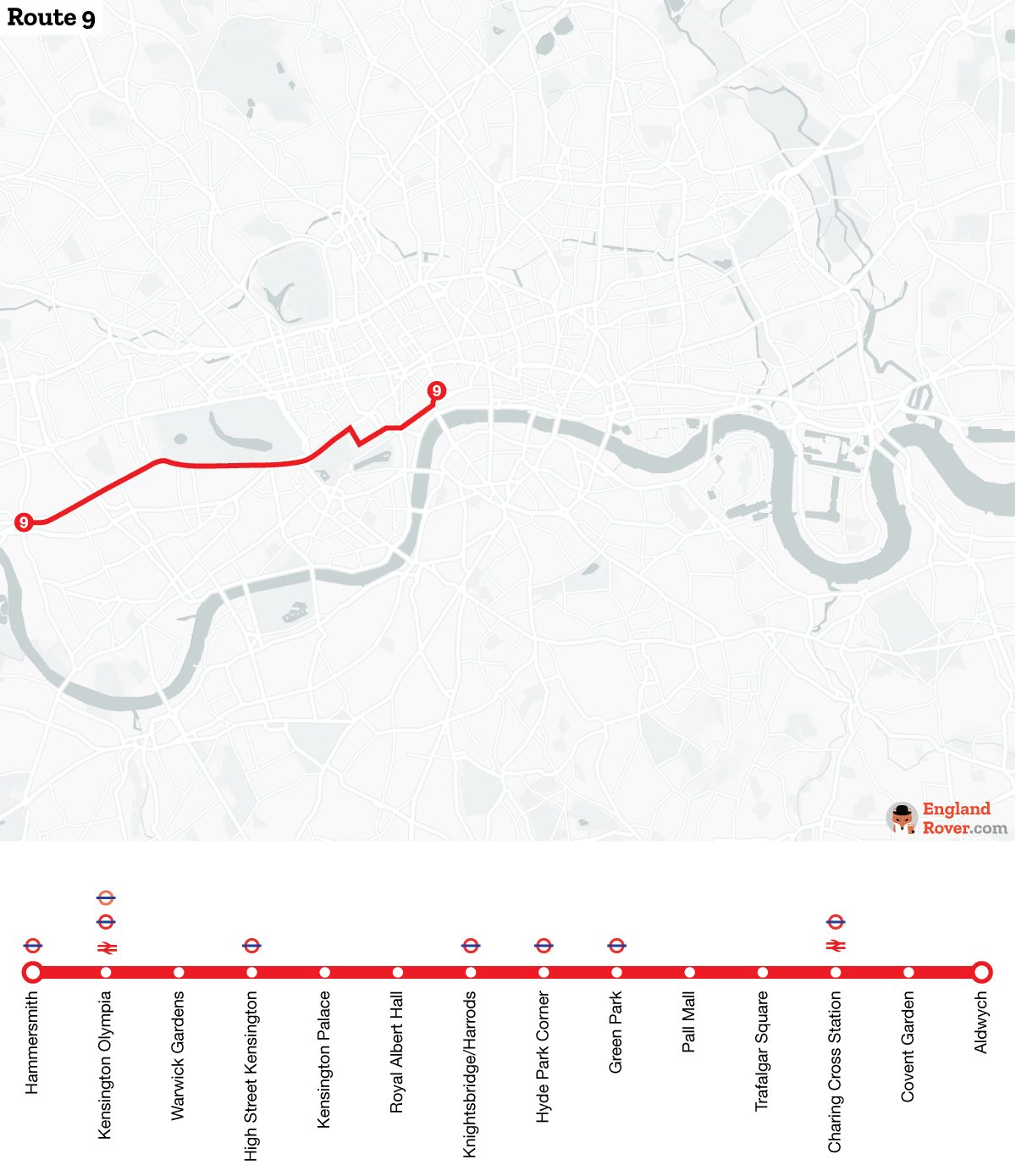 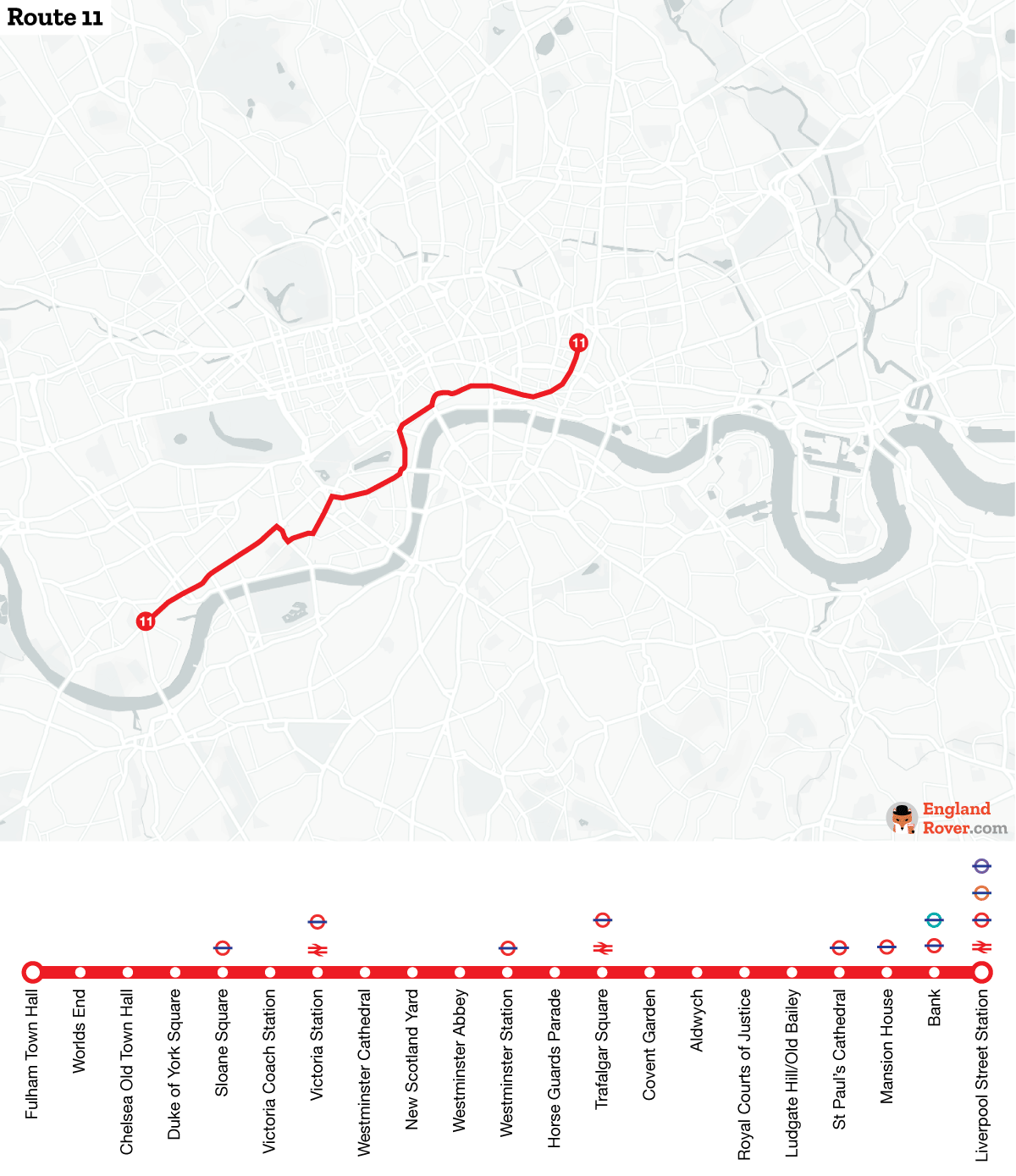 Route 15 runs between Trafalgar Square and Blackwall in the Docklands.

From Trafalgar Square it runs past Charing Cross railway station, then along the Strand, past Aldwych to City Thameslink station, St Paul’s Churchyard, Mansion House, Cannon Street station, Monument, past the Tower of London, then it heads past Aldgate and along Commercial Road in the East End and along East India Dock Road, just north of the Docklands, and it terminates at Blackwall DLR station.

The section between Trafalgar Square and Aldgate is the most scenic part of the route and it becomes a lot less interesting east of here. Bus route 15H (the H stood for heritage) was a shorter version of the route that ran between Tower Hill and Trafalgar Square using 40-year-old Routemaster buses; however, this route was discontinued in September 2019 and the entire route is now operated by the more modern New Routemaster buses. 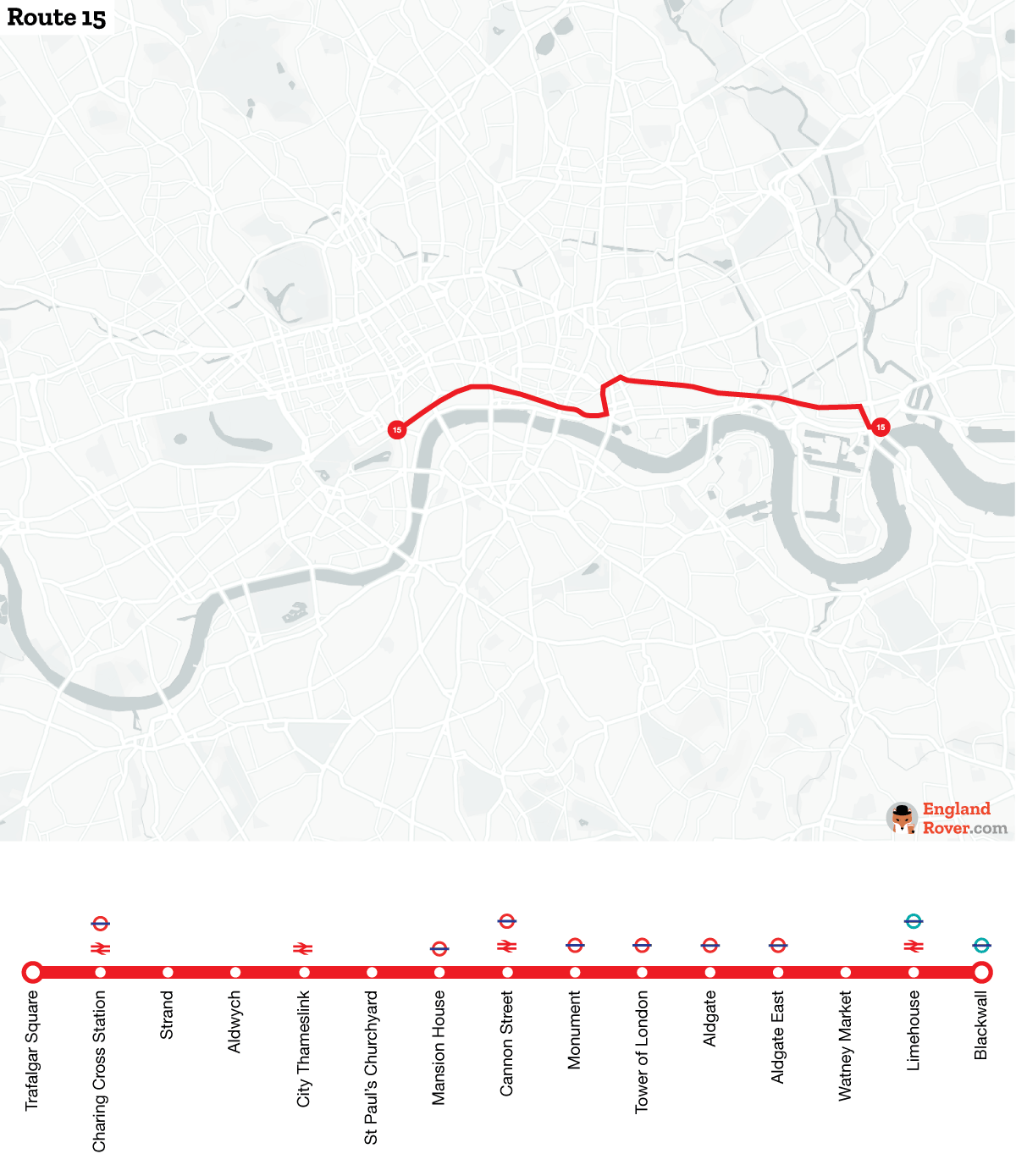 Route 24 runs from Grosvenor Road in Pimlico to the Royal Free Hospital near Hampstead Heath.

This bus route starts at Grosvenor Road on the northern bank of the River Thames in Pimlico and goes past Victoria railway station, through Westminster passing Westminster Cathedral, Westminster City Hall, New Scotland Yard, Westminster Abbey, Parliament Square and Horse Guards Parade, then it passes Trafalgar Square and Charing Cross railway station, Leicester Square, Cambridge Circus and heads north through Camden Town (allowing you to get off to look around Camden Markets) before finishing near Hampstead Heath. 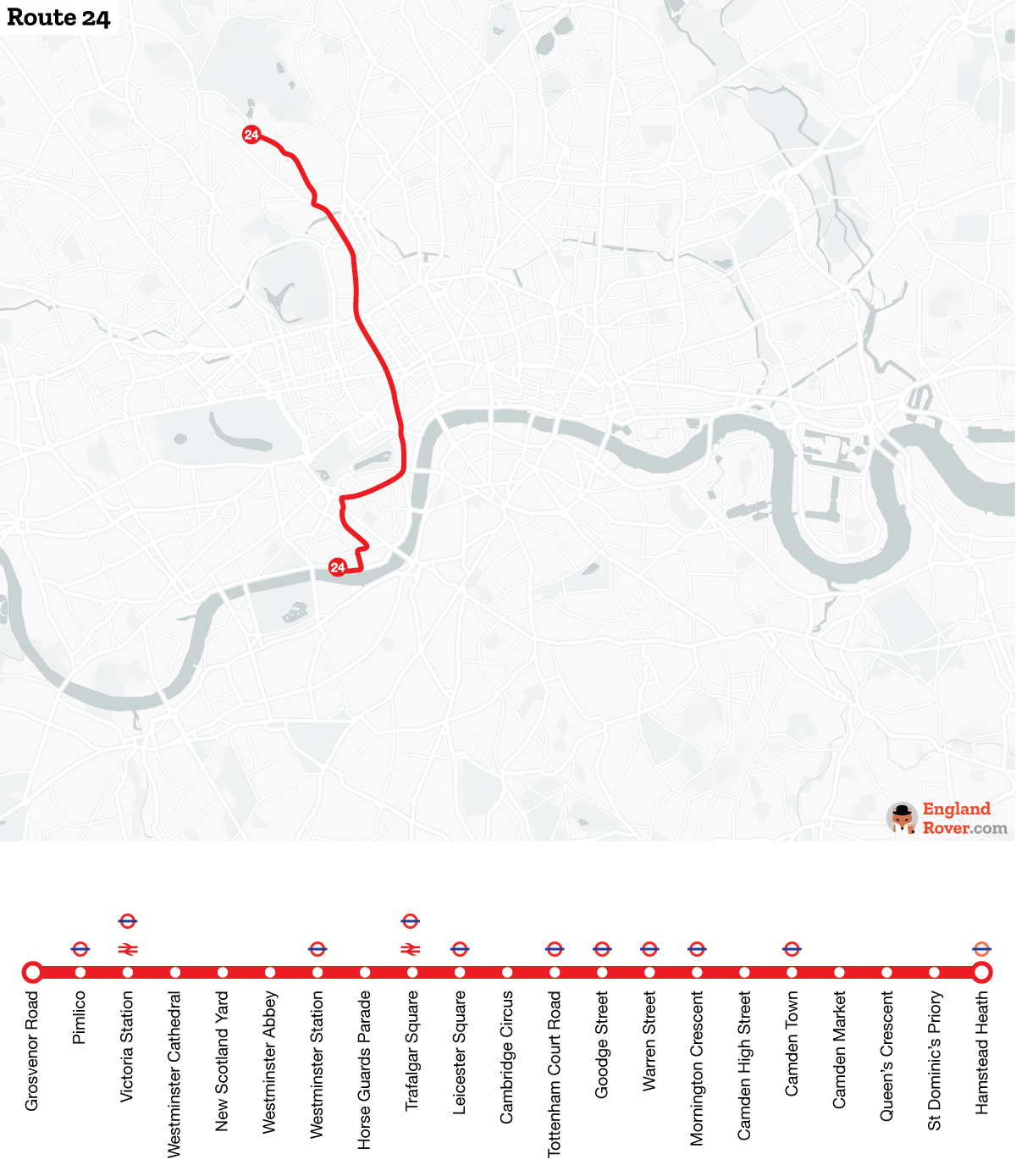 If you are riding the southbound route you can take the London Overground train service to Hampstead Heath and walk down South End Road to the Royal Free Hospital on Pond Street.

After leaving Putney High Street, the bus crosses Putney Bridge stopping at Putney Bridge tube station, goes up Fulham High Street and past Fulham Cemetery, then up Lillie Road and through Earls Court, past the South Kensington museums (including the Natural History Museum and the Victoria & Albert Museum), through Knightsbridge (stopping outside Harrods), along Park Lane to Marble Arch, past Selfridges and up to Baker Street tube station. 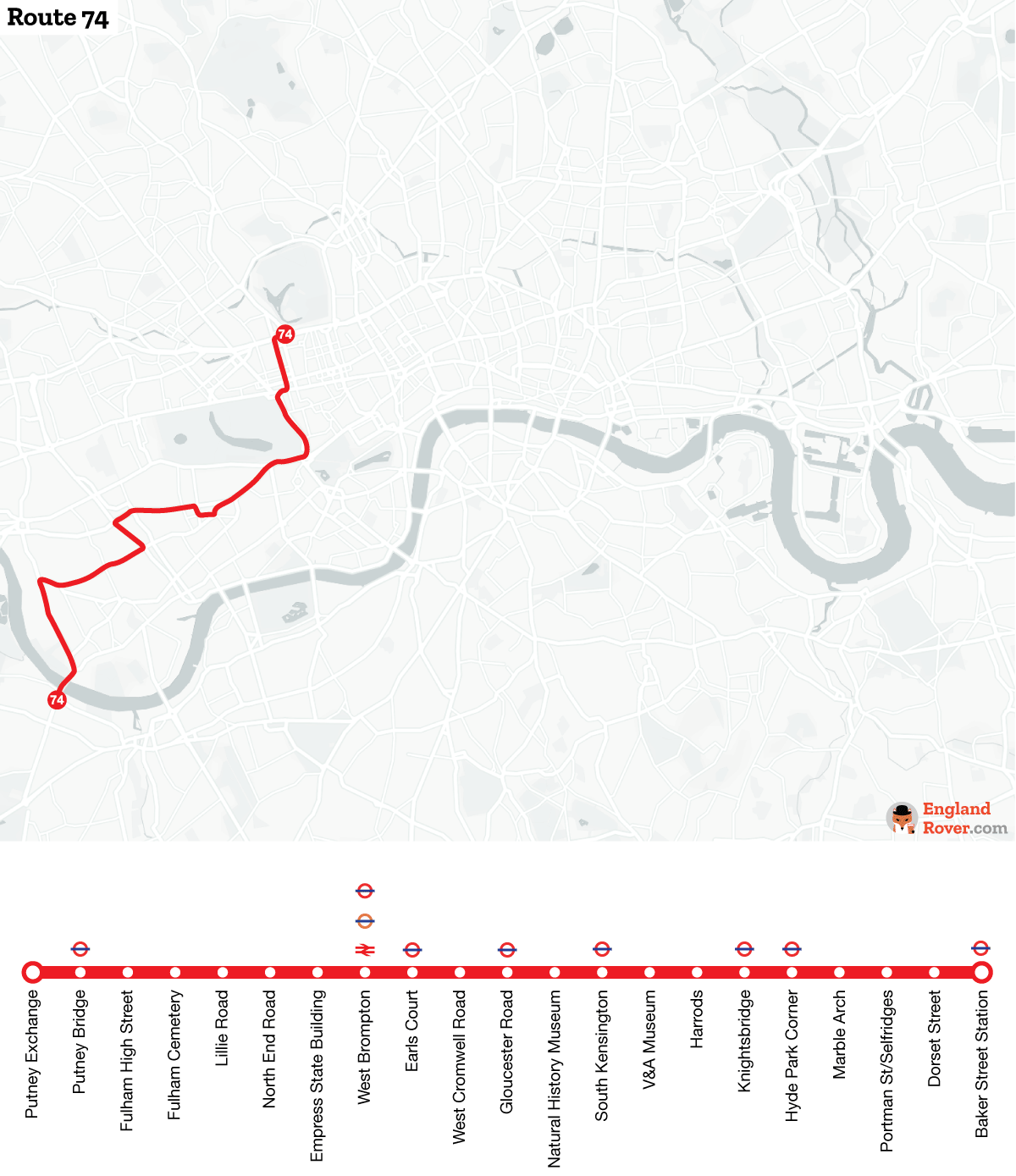 A standard bus fare costs £1.55 and you need to pay by Oyster card, Apple Pay or contactless credit/debit card (you cannot use cash to pay your bus fare). There is a daily cap of £4.65 so that is the most you will pay (the daily cap in zones one and two is £7.40 if you also ride the tube or train that day). You need to touch on with your Oyster card (or Apple Pay/credit/debit card) when you board the bus, but don’t need to touch off when you get off.

next
Getting around London